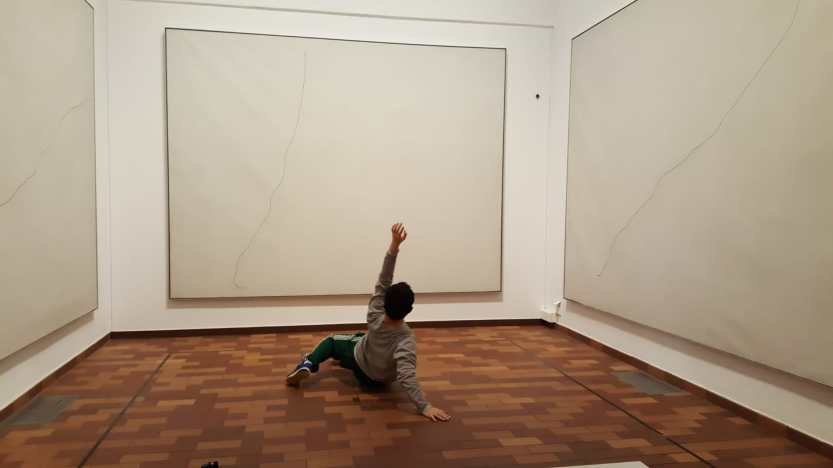 Quim Bigas – Moving In / Out the museum

During the different talks and exchanges of the Barcelona workshop there was often a strong desire to find ways of bringing the physically absent into the space. How could we inhabit the museum rooms where we should have been meeting and working even though we were all apart? How could we make the European team and the distant audience travel through the space of a museum or a dance house anyway?

Quim Bigas’ lecture could be described as a kaleidoscopic journey, or rather a stroll through the Fundació Joan Miró in Barcelona, but from afar. From a dance studio in Copenhagen, surrounded by the team of Dansatelier, Quim speaks and dances, walking us across his personal and sensory experiences of the Fundació Miró with his every word and movement. Conjuring up anecdotes and memories involving the team working at Fundació Miró, but also the visitors, some of Miró’s works of art and a variety of people present in his mind while talking, Quim weaves a kind of web made of feelings, memories, actions, movements and thoughts shared with us. Filmed from different viewpoints, thanks to several computers placed in the space, his performance is also accompanied by a live text shared by Joana Ellen Öhlschläger in the chatbox, which adds another layer to the experience, recalling a previous visit to the museum space, depicting some precise moments.

The vivid imagination at work here has many entry points and for us, assisting behind our screens, Quim’s proposition transforms into a personal stroll, during which some sounds, textures, words or images stay with us.
For instance, a way of retracing this moving in and out the museum could be:

Details and bigger pictures, trivia and art are mixing and cohabiting within the experience, in the space of the imagination.